WPA members were treated to an exclusive briefing and tour of the world’s first Linear Proton Beam Therapy Centre, courtesy of WPA Board member The Howard de Walden Estate.

Representatives from The Howard de Walden Estate and Sonnemann Toon Architects provided guided tours of the facility, situated in London’s Harley Street Medical Area. Most Proton Beam Therapy schemes require a 70,000sq ft facility, yet the scheme at 141/143 Harley Street has been built underneath and within two adjoining listed buildings and the space comprises just under 15,000sq ft.

This new technology, developed in Cern by a British company ‘Advanced Oncotherapy’, should transform viability on providing PBT as a more effective alternative to traditional radiotherapy for the treatment of cancer. Nic Serandour, Chief Executive of Advanced Oncotherapy,spoke of the benefits of this treatment and shared his ambitions for the Centre.

Barbara Brownlee, Executive Director of Growth, Planning and Housing at Westminster City Council, delivered the closing address, commenting upon the City Council’s commitment to Westminster’s role as a pioneering centre of medical excellence.

This informative and interesting evening proved popular with members and marks an exciting scientific and technological transformation in what is London’s original knowledge cluster. 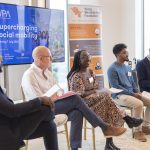